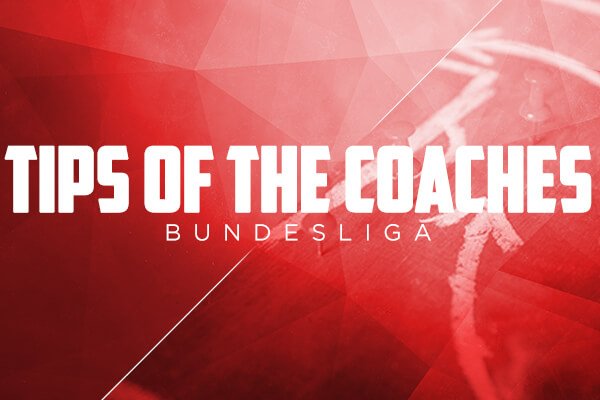 The Fantasy Bundesliga is becoming increasingly popular and the number of tournament on offer is growing all the time. Here are my top 5 daily fantasy football tips for the Bundesliga.

Thanks to Bethard fans can now look forward to the introduction of brand new daily fantasy tournaments for the Bundesliga . Daily Fantasy Bundesliga with Bethard – Promo inside

So that you get off to a good start with the new platform, we have provided you with all the odds and statistics for the Bundesliga match day.

On top of that, I’ve put together some important tips for daily fantasy Bundesliga tournaments! Here are my top 5. Enjoy reading.

In the Bundesliga relatively few goals are scored in comparison to other leagues. If you look at the bookmakers’ odds for “more than 2.5 goals” in the Bundesliga and compare them to the same set of odds for the Premier League or even La Liga in Spain, you can see that the odds are regularly more than 50% lower than in the other leagues.
What are sports betting odds?

An overview of all odds of the upcoming Bundesliga matchday is available in the PreviewsThis will give you all the important statistics for the match day and is the place to look for answers to the following questions: who has the highest chance of winning, which match is likely to see the most goals, which team is most likely to keep a clean sheet and which player has the best chances of scoring?

For you, this means you can make use of many defensive players in your line ups. Firstly, this is solid strategy when fewer goals are scored and, secondly, it is lighter on your budget.

My golden rule of daily fantasy football for the Bundesliga is: Never neglect your defense!

The basic rule of setting up a good defense can be found here:
“Setting up the defense – forming blocks
“.

In the Premier League, these teams are Manchester City, Manchester United, Tottenham, Arsenal, Liverpool and Chelsea. In Spain they are, Barcelona, Real Madrid and Atletico Madrid. In both cases, these teams just run rings around their so-called competitors in the league.

In the Bundesliga there is rather less of a drop between the leading teams and those following them. Obviously FC Bayern have long dominated the league, but after that there’s “everybody else” all more or less in one evenly-matched group. Perhaps Borussia Dortmund can also lay claim to a special position in the league, but in my opinion, BVB has lost ground over the last two years, dominated by the overpowering Bayern.
Bundesliga 2018/19 Team Analyses and Fantasy Tips

What this means in practice can be easily seen by a glance at the 2017/18 league table. In the Bundesliga, there were only 22 points between the teams which went to the Champions League and the first relegation place. In the Premier League it was 42, in La Liga 44 !!

For the fantasy manager, this means that encounters tend to be less clear-cut. This means that it’s at least doubly important to undertake thorough Match day preparation, in which you analyze the games in advance and identify the best matches. This brings me to my next tip…

As we already mentioned in Tip # 4, FC Bayern is very much the leader of the pack in the Bundesliga, which means that one fact is quite clear. You have no chance of success in the fantasy Bundesliga unless you have FC Bayern players in your line ups, in fact you should try to set the maximum number of Bayern players in each of your line ups. Even if the men from Munich are playing against Dortmund, Bayern players will still be well ahead of the other teams in terms of clean sheet and scorer odds.

Forgoing Bayern players is very definitely an exploit (an exploit is the deliberate departure from a profitable strategy for a specific reason which has a positive expectation) which you should only use to break away from the rest of the field in large tournaments. See
5 Killer Tips for Big Fantasy Football Tournaments

You can make an exception to this rule if the championship is already a done deal. In the past, once Bayern knew they had the title in the bag, they let their standards slip and, of course, there is an increased risk of rotation. By that point in the season, even the most dangerous Bayern player will not mind if he sits on the bench.

In a balanced league with few goals, set-piece situations increase in importance. In the daily fantasy tournaments, a large part of the field will choose the obvious Bayern players, as mentioned in the previous fantasy tip.

But it is often the minor players who decide on tournaments! Here the set-piece takers give the certain amount of points potential you need for successful team drafts. You will probably know the set-piece takers at your favourite club and the top teams, but do you know who takes corners at Fortuna Dusseldorf, or who is the main penalty shooter in Nuremberg?

Tip #1: Choice of captain in the Bundesliga

Of course, the eternal question of who to choose as captain also applies in the fantasy Bundesliga. On most match days, however, the answer will be Robert Lewandowski, won’t it? Well, yes and no! The top striker from the top club in the top German league is. logically, guaranteed to pick up points and the “standard answer” to the question of who gets the arm band.

Exploiting this fact is risky, but also offers opportunities! If the striker scores and you have someone else wearing the captain’s armband, you can pretty much forget finishing in the money. Too many players will have chosen the man from Poland as their captain and will pass you by.
Oh Captain, My Captain – Choosing a Captain

On the other hand, if you successfully bet against Lewandowski, then you will go sailing past a large chunk of the field.

My tip: Base your decision on the facts of each match day, but always look for alternatives to the man from Poland and by prepared to switch your nomination if a player seems to you at least as promising. For me, Bayern defenders are always interesting. In particular, David Alaba and Joshua Kimmich offer a strong mix of scoring potential and (almost always) excellent clean sheet odds!