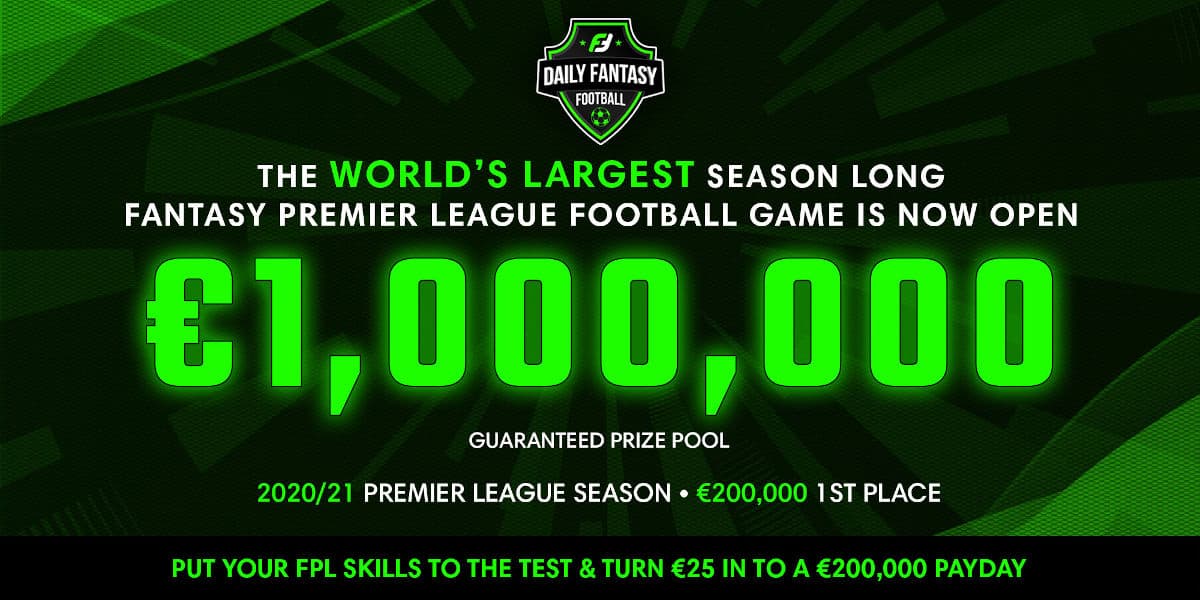 Like last years season long tournament, the entry fee will remain at €25. But this season fantasy football managers get so much more for their money – including a first-place prize of €200,000.

Firstly an overview of the prize distribution of the €1,000,000 prize pool.

In addition, there will be weekly & monthly leaderboards.

If you top the weekly leaderboard then €250 will be sent your way;

The top 5 managers of the month will win huge as well, every month! Top 5 places in the monthly leaderboard net

In addition to the million euro prize pool, the weekly exclusive are the big news for this tournament. Seasonal fantasy managers in the game will receive entries to exclusive weekly tournaments.

This simply means, that the Season Game is even more value and you can try daily fantasy tournaments. This makes it very easy for new players. 33 tournaments with guaranteed prize pools will be scheduled, one per game week. These fantasy tournaments are exclusively open only to 1Million season game players and by ticket only.

These tournaments are free to enter, as the prize money will be taken from the prize pool of the season game. Every player will receive 4 tickets for each entry they make into the season game. The maximum number of tickets a player can be awarded, is 33 – as each tournament only allows each player one entry.

Prizes in the Weekly Exlusives

Lets have a look on the game rules.

In this section, we look at the game rules of the Fantasy Premier League Cash Game. You can find the full details of the game rules in the tournament lobby or in the Support Center on Fanteam.com.

Get a full and detailed breakdown of the Fantasy Premier League Cash Game scoring system in Fanteams Support Center.

Make sure to check out Seasonal Fantasy vs. Daily Fantasy Sports

All managers of the Fantasy Premier League should carefully read these posts:

That is to say: If you’re an avid Fantasy Premier League player, you’ll fancy your chances of a top rank finish in worlds biggest season long game, as your skill set is already well adapted for such a massive cash league.

In conclusion, this was the post Fantasy Premier League Cash Game – 1 Million Euro Gtd., looking forward to your feedback in the Community!